What kind of murmur fills the libraries’ reference rooms in Dublin and Sergiyev Posad? Where do we find the wildest karaoke — in Lithuania or in Russia? Can you tell the waves splashing against the shores of the Indian Ocean apart from those of the Lesnoye Lake in Sergiyev Posad?

View this as a sound map

Let’s listen and compare those sounds. This experiment makes no claim to being scientific or even reliable in the strict sense. It does not favour one recording over another. All it suggests is that careful listening and comparing can help us better understand ourselves and the world around us.

The first recording was made there, the other one is here, or vice versa. All are taken from the collection of oontz.ru — a Russian field recording archive, except for the one, that has a special note

A good number of recordings on this page are taken with binaural microphones, so listen with headphones, and this will bring an extra dimension to it.

This series has been showcased in February 2018 at the Vassily Rosanov library in Sergiyev Posad, when we’ve had a listen together with the members of Sergiyev Posad branch of the Russian Society for the Blind. Now here’s an extended online version.

Dublin, Ireland. Reference hall, a bit church-like with its Long Room spanning over 65 meters at the Trinity College in Dublin. High multi-storey racks rise up to the arch-shaped ceiling. The books that are stored there could be reached only by stairs. The place is solemn, magical but at the same time it feels like a real, a true reading room. 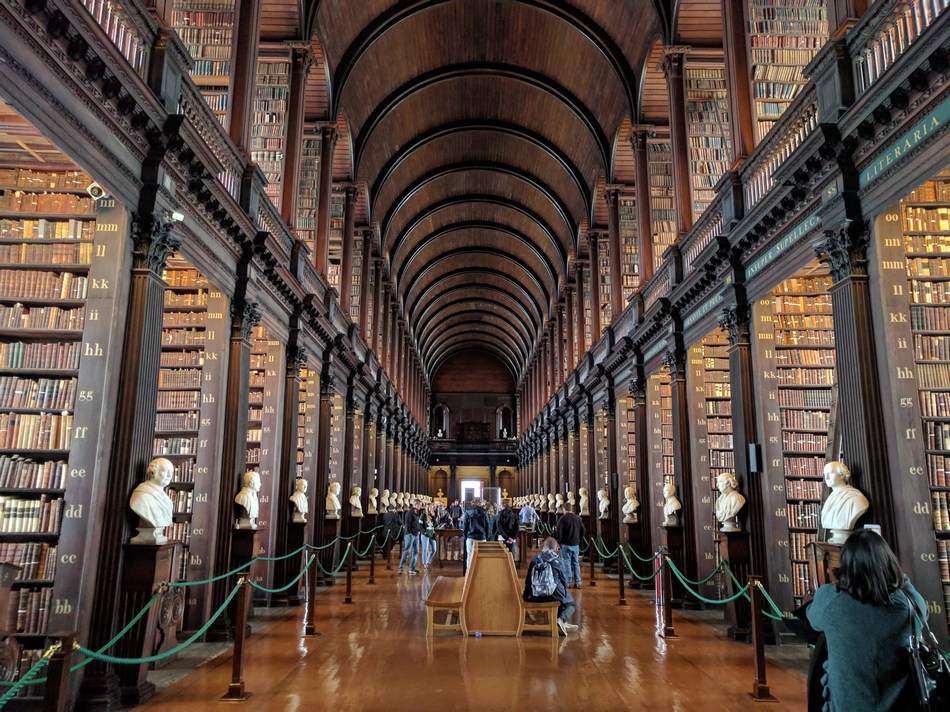 Sergiyev Posad, Russia. Reference room at the Alexander Gorlovsky Library, one of the two largest libraries in the city. It has been completely renovated, and now serves as a modern community information center, quite unlike the libraries we’ve used to know. In this recording, we hear the noise of the ventilation system, the voices of librarians, the pages turning, computer mouse, well, mice? clicking and finally the rehearsals of the choir, coming from the neighbouring room.

Limerick, Ireland. Canoe lessons for Irish kids. This is a pier near the Hunt Museum, made of gray stone, the colour that is quite often to be found in this city. The water of Shannon, the river flowing into the ocean, is something about two degrees Celsius, but the kids do not care. 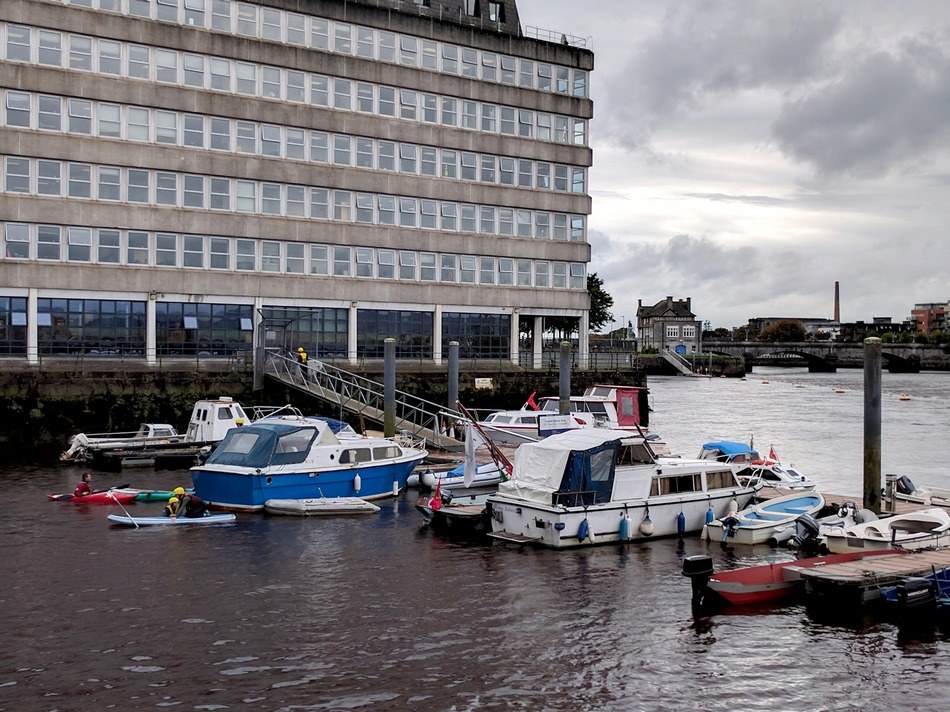 Sergiyev Posad, Russia. Someone is learning to play the piano. You can hear it through the closed door but cannot tell whether it’s a boy or a girl, young or old. This particular moment is of dealing with a tough piece of Für Elise. The class is located at the Gagarin Concert Hall.

Lübeck, Germany. This third recording is of another piano lesson. It’s a very short fragment, overheard by chance on the street of this northern German town. This picture was taken not far the house on Tünkenhagen street where the music was heard at. It is not directly related to this lesson but provides a good idea of that place is like. 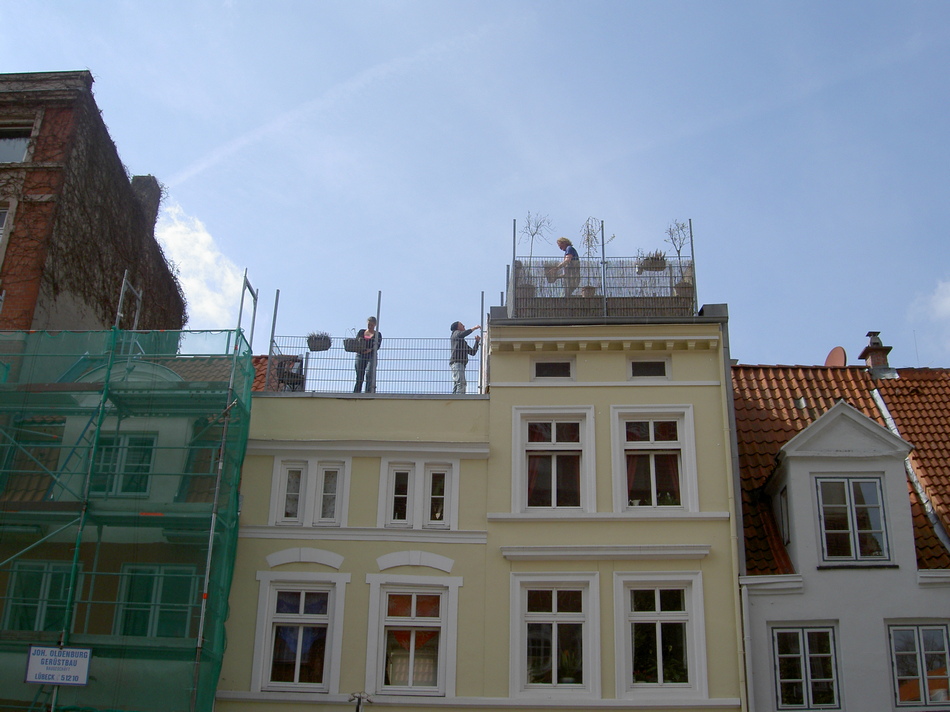 Stockholm, Sweden. Guardsmen of the Royal Orchestra pass through the streets of central Stockholm. Changing of the guard is a brilliant performance above all, and here is what makes this performance even better — street noises, sounds of steps, irregularities, and other ‘faulty’ audio. 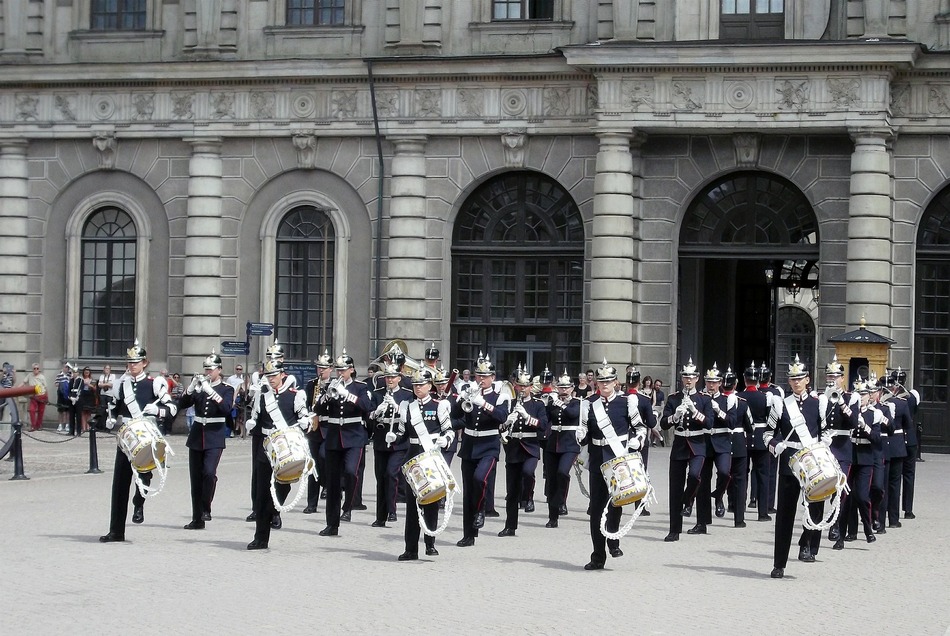 Sergiyev Posad, Russia. Communication officers’ orchestra from Medvezhye Ozyora, a small town in the Moscow area. What makes this scene special is that they play at the opening of the Sambo (Russian judo-like unarmed combat fighting) tournament in Salyut sports arena. The orchestra repertoire also features Strangers In The Night, famously performed by Frank Sinatra. But here is a different tune. 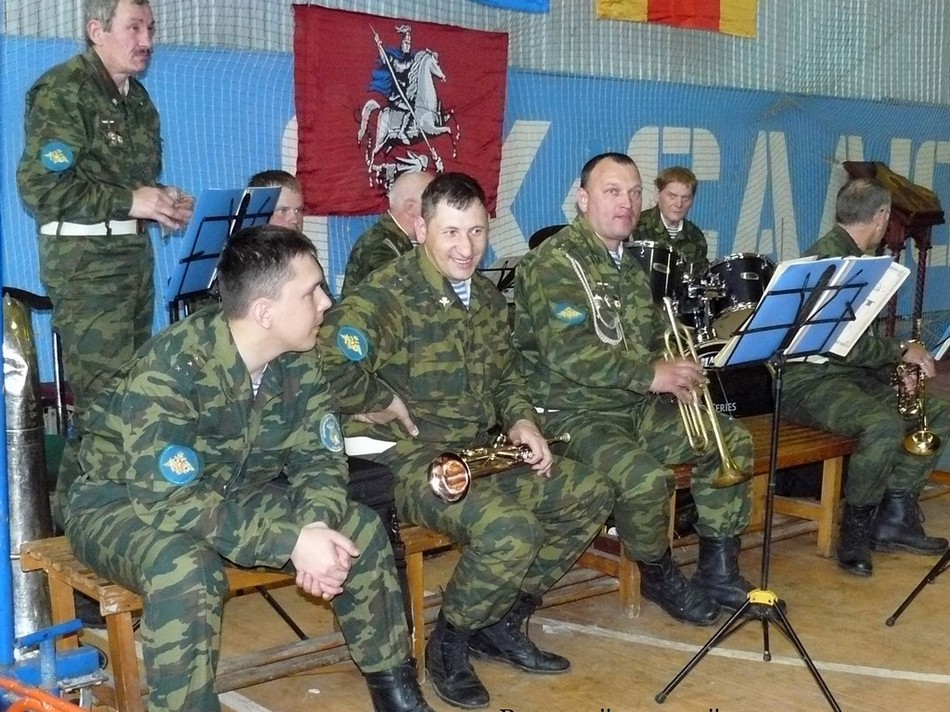 Vilnius, Lithuania. This is the only recording in this series that was taken from some other website. There were reasons for sharing this audio track from a YouTube video, and the reason is the Lithuanian language. It’s one of the oldest in the Indo-European family of languages, and it is said it has not changed for centuries. So, what karaoke in this archaic European language would sound like? This is a recording of a school graduates’ farewell party. They sing a song called Laisvė, which means Freedom in Lithuanian. 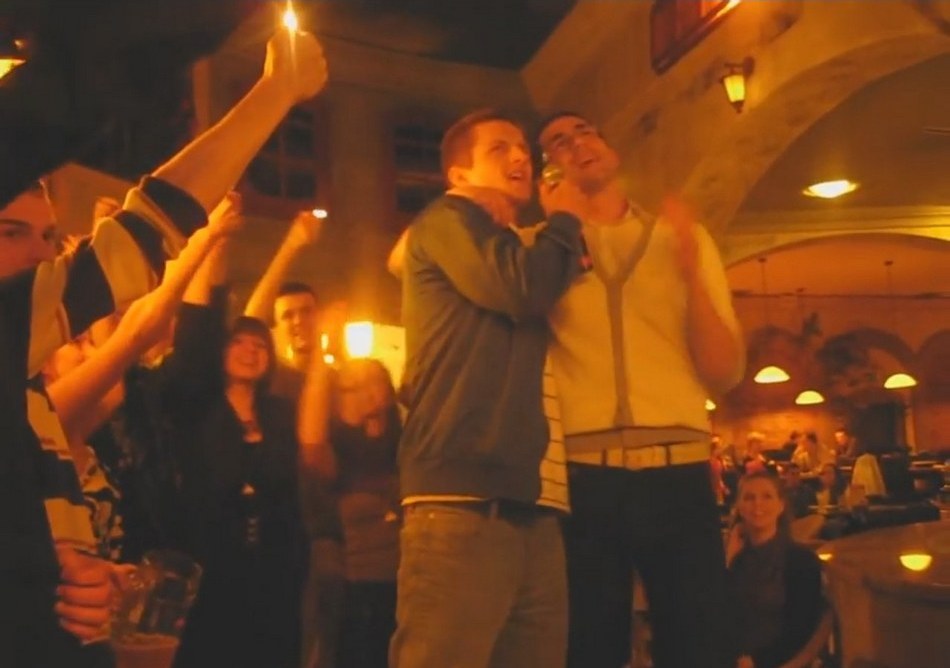 This song became popular in 1989, when this Baltic republic gained it’s independence. A quarter of a century later it was performed by Jurga, a very popular singer in today’s Lithuania, and now Freedom sounds quite different. Given the fact that it was sung by former schoolboys at the graduation party, Freedom gets yet another meaning. Now let’s compare the karaoke and Jurga’s studio version:

Sergiyev Posad, Russia. To the east of Sergiyev Posad there is a single-story, rural quarter with a cheerful name Goat Hill — Kozya Gorka. Several times a year the local people arrange holidays for themselves and by themselves. With no instruction handed down — such an instruction is often the case — they enjoy doing it on their own. This karaoke comes right from that party. It’s summer’s late evening, twilight (not captured at the photo) and everyone feels fine. At the very beginning of this recording there are words, barely audible Dima (that’s a male name), both eyes on me! — Dima, oba glaza na menya! What a good atmosphere. 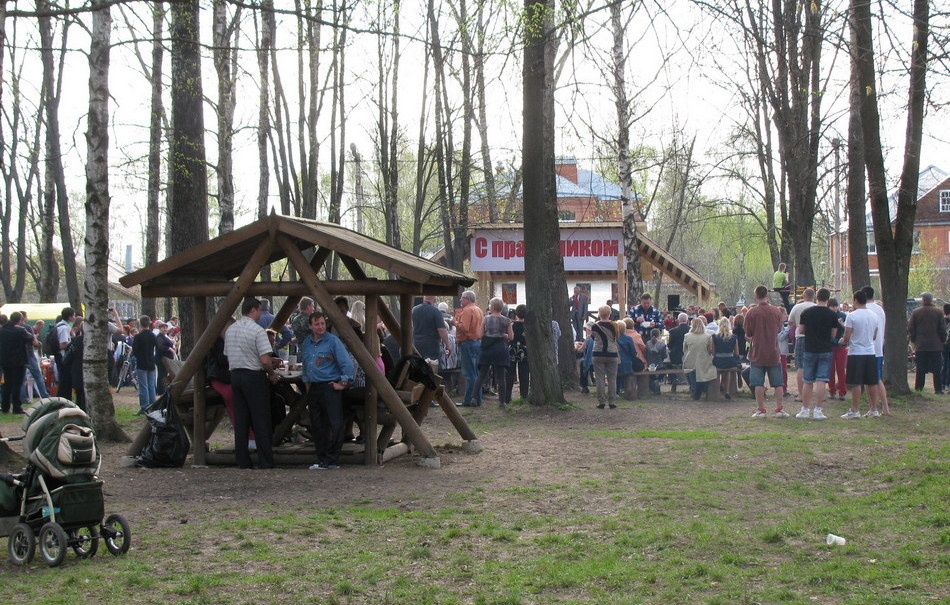 Limerick, Ireland. Not a karaoke as the two previous pieces were but a duet too. In the same Irish city of Limerick, in a popular pub called The Locke, two guys play music — one on the guitar, another on the Irish button box, a folk-type accordion. At some point, the dancer enters with a step-dance, and the duo turns into a trio. 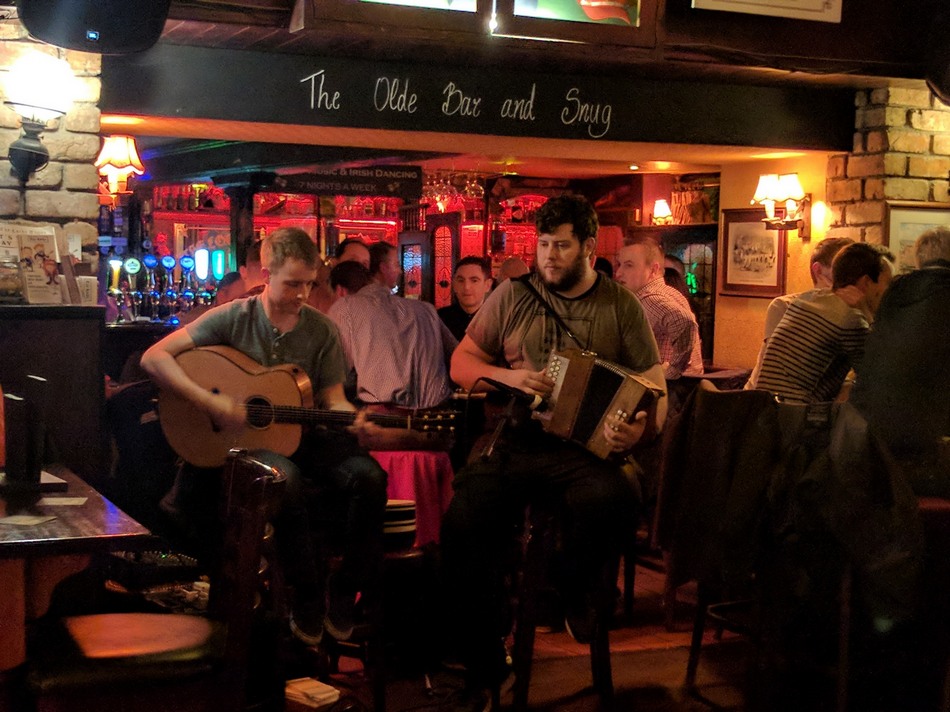 Ireland, Dublin. The performance in the Gaiety Theater has ended. This is one of the oldest theaters in the city, and not just old, but remarkably old-fashioned, with a large chandelier under the ceiling, soft red velvet chairs, beautiful pictures of ladies on black and white photographs in the foyer. The background music is heard, hypnotic and spooky, and on top of this there is a knocking of the backs of the seats, one by one inspected by the theater personnel. 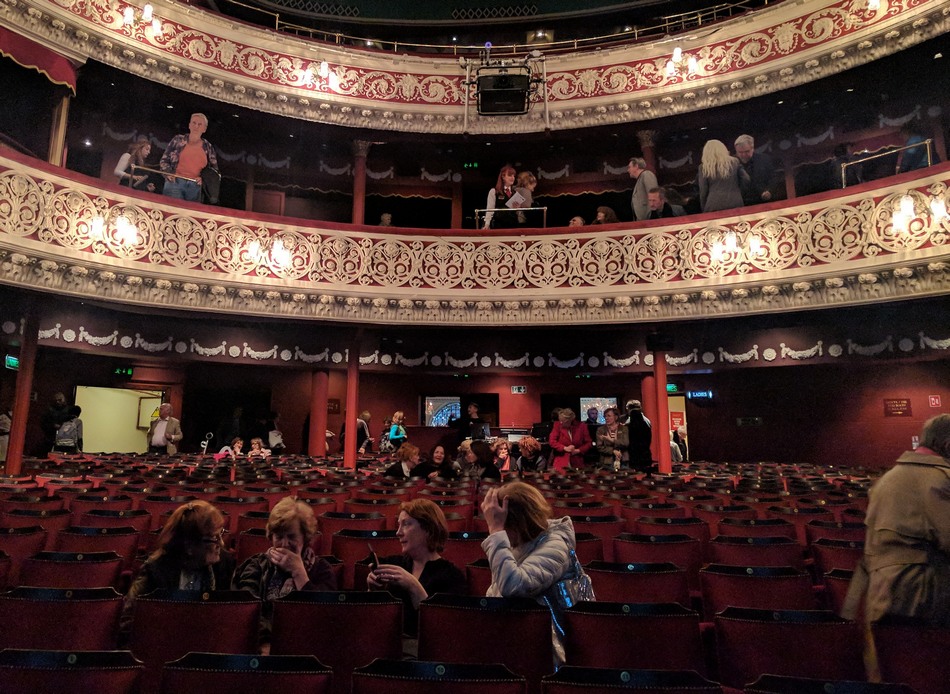 Sergiyev Posad, Russia. This is the post-performance stage sounds at the Teatralny Kovcheg theatre. The hall is empty and the only noise is created by the cooling systems. Another play will be performed on this stage soon, and but until that the whole place overheated by spotlights and actors presence, needs to cooled down a little.

Sergiyev Posad, Russia. The spot where this recording has been taken is located in the central part of the city but it is still relatively unknown by the tourists. It overlooks the western wall of the monastery, where tourists rarely go — except for a brief moment when they leave the bus that stops not very far from this wall, and rush to the monastery’s main gates around the corner. The sound of bells gets mixed up with the city sounds. The sound was recorded in 2017 but the photo is quite old, it seems to be from the 1950s or 60s. 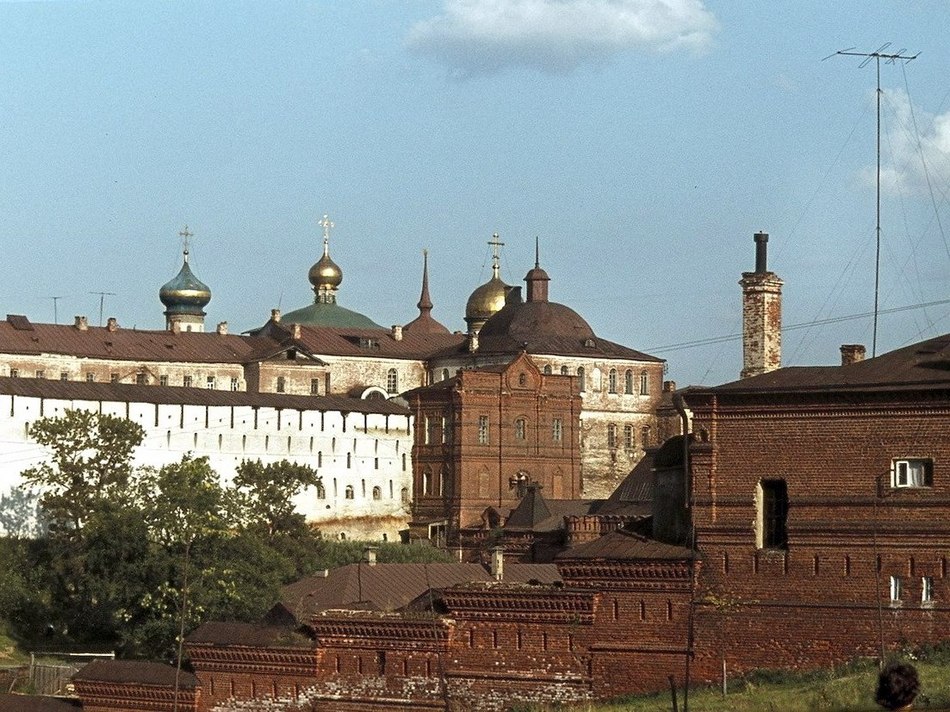 Hvar, Croatia. Bell ringing in the town of Hvar on the island of Hvar in the Adriatic. In Western Christianity, it’s not the tongue but the bell itself that is swinging, which affects the sound. In Russia, such a system can be heard perhaps only in the Pskov-Caves Monastery near Pskov. 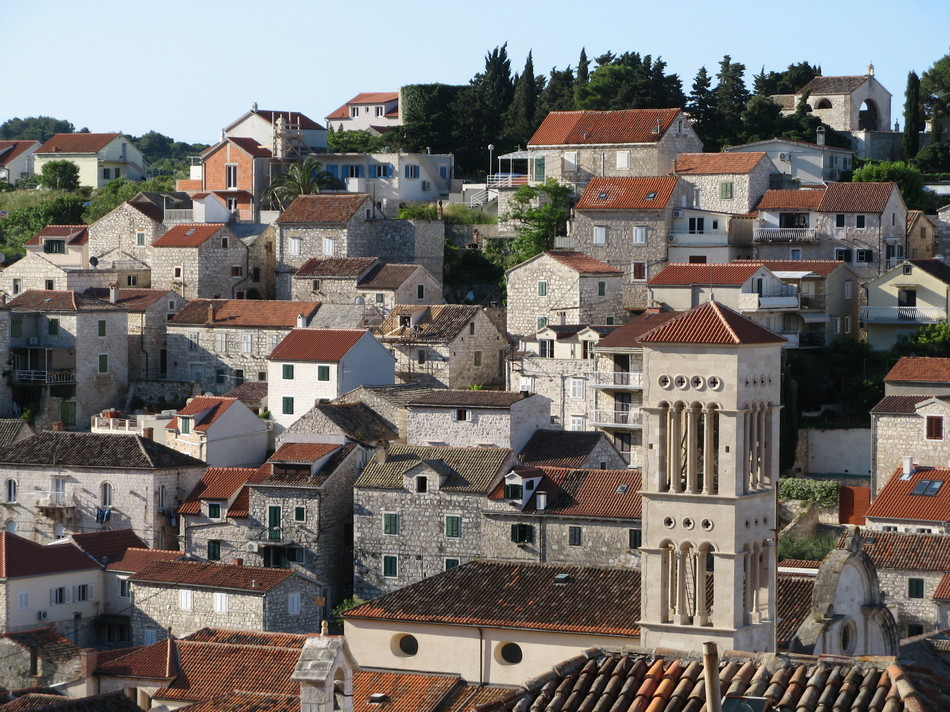 One after another these horses are making their ways in this recording. First the Bulgarian one, from the old southern town of Sozopol. It can easily be a horse with a cart, loaded with planks or wood — this is a common type of transport there. It is followed seamlessly by the second recording of stables at the Sergiyev Posad equestrian club, a few years before the fire broke out there, taking life of a few horses. 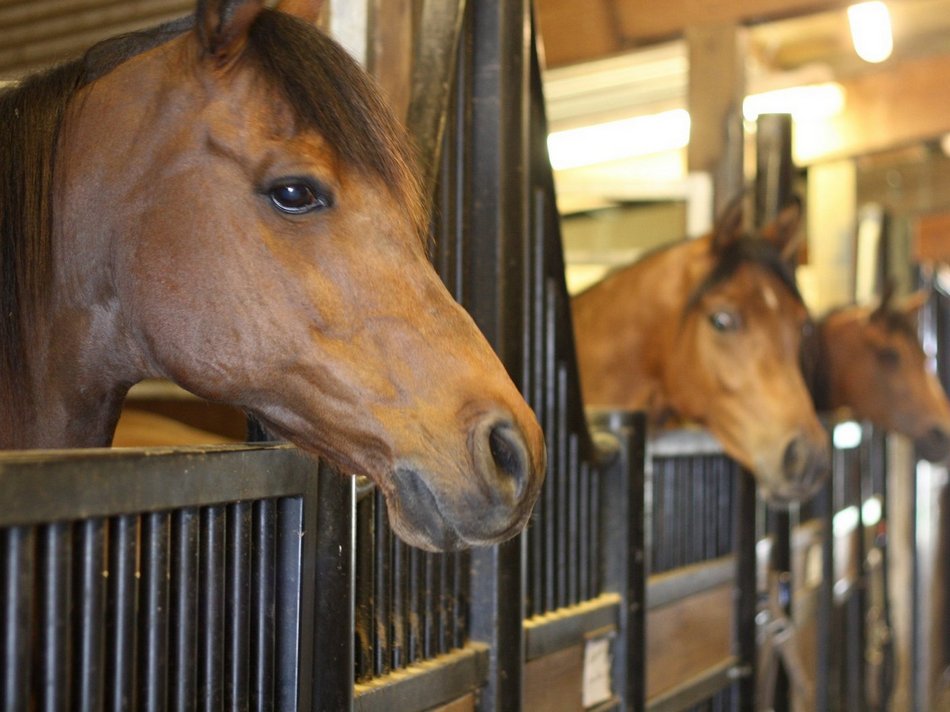 Budapest, Hungary. An unsuspecting tourist may skip the Bambi Café, and let him do so to make his way to some more trendy establishments, with a fancy menu and colourful interior. He probably wouldn’t be happy to tell his friends of how he went to a snack bar where a rag hangs on the entrance handle, and the retired people play dominoes inside. But those places are worthy of special attention exactly because of that — you can see ordinary local life, which has not changed much in recent decades.

So here are four Budapest pensioners playing a round. One can hear the sound of knuckles getting mixed, then they are going to have a drink. The waitress brings four glasses of wine, but one of the players seems to be dissatisfied with it. He asks the girl to pour the wine into an old-school thick glass tumbler instead.

Sergiyev Posad, Russia. The board game of Morskoy Boi (that’s Naval Battle in English) has almost disappeared from our lives. This was a simple game in which the two, placing an imaginary ships on their square paper fields, try to guess the same kind of ships on the competitor’s fields. That is why it was twice as interesting to meet the two shop clerks at the hardware store in the remote Afanasovo area playing this game, but the their boss comes, so they have to crumple their paper seas in a hurry.

Hvar, Croatia. UNESCO put klapa, this Croatian tradition of male a cappella singing, on the list of the world’s intangible cultural heritage. It is enormously popular in Dalmatia, sung without a conductor, and the rhythm is not that important as the harmony. 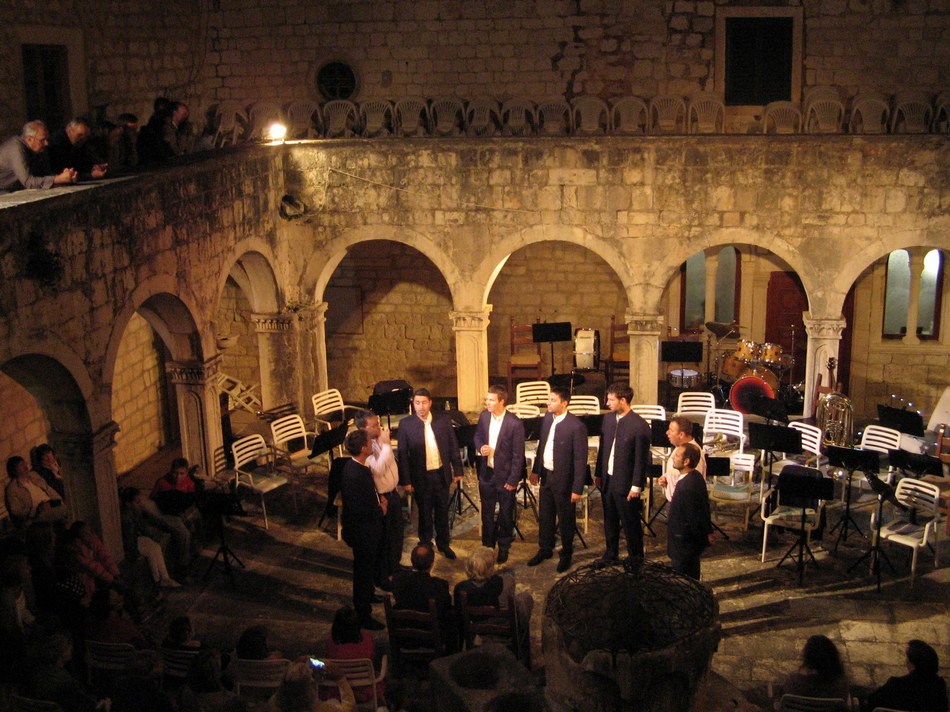 Sergiyev Posad, Russia. In fact, this should be considered a faulty recording. The cracking sound has leaked into the choir performance, it was the close mic recording of a burning candle. But this turned out to be a good thing, providing a better sense of of a church ceremony. It was recorded at the subtemple of the Moscow Theological Academy based in the Trinity-Sergius Lavra. 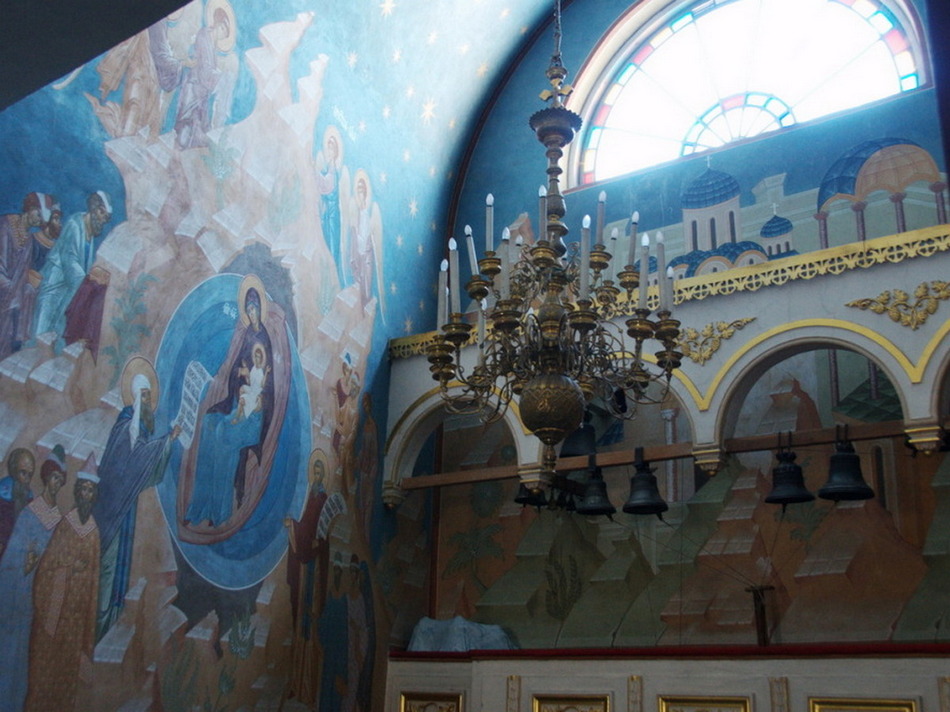 Sometimes you do not have to go far to hear beautiful rhythms. They are everywhere: 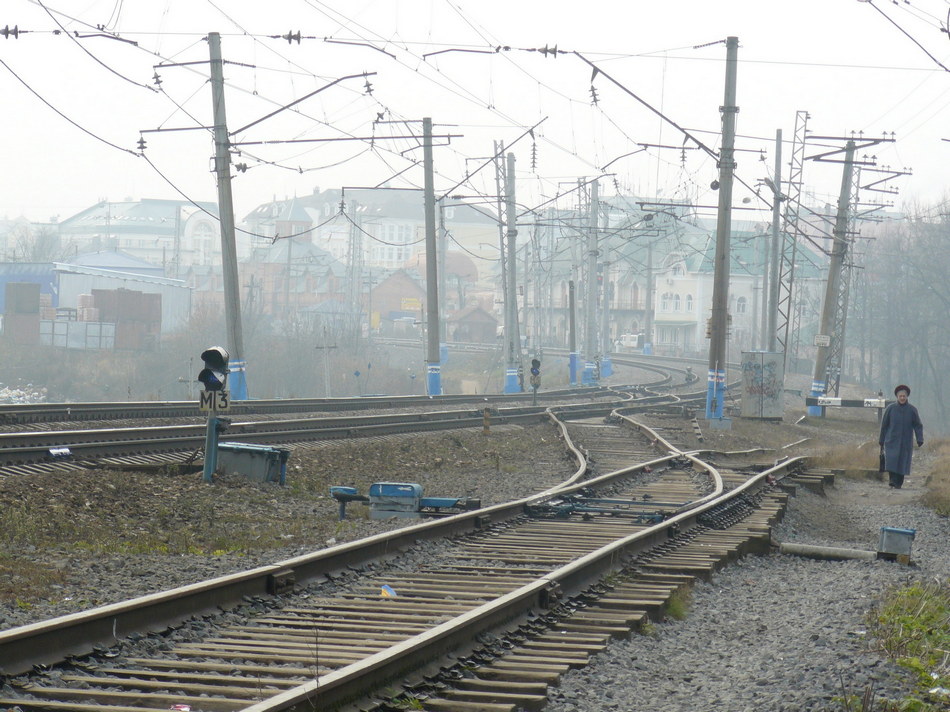 All recordings were made in Sergiyev Posad

There are thing that sound the same wherever they are. The dry leaves, yellowed in the wind, produce the same noise everywhere. Where, in which city was this recording made? No one knows.

The Liberation Tigers of Tamil Eelam were one of the most furious and dangerous terrorist organiztion of the 20th century. From the 80s to the 2000s, Tamils, who adhered to Hinduism, in fact created a national state in the north of Sri Lanka, while the rest of the island was inhabited for the most part by Sinhalese Buddhists. To get the idea, there is a couple of thing that need to be known — this militant terror group had its own aircraft, and the ordinary soldiers wore an capsule with poison, so as not to give up alive. Here is a recording of an ambiance of a night beach in the village of Uppuveli near the city of Trincomalee — the former stronghold of Tamil Eelam. 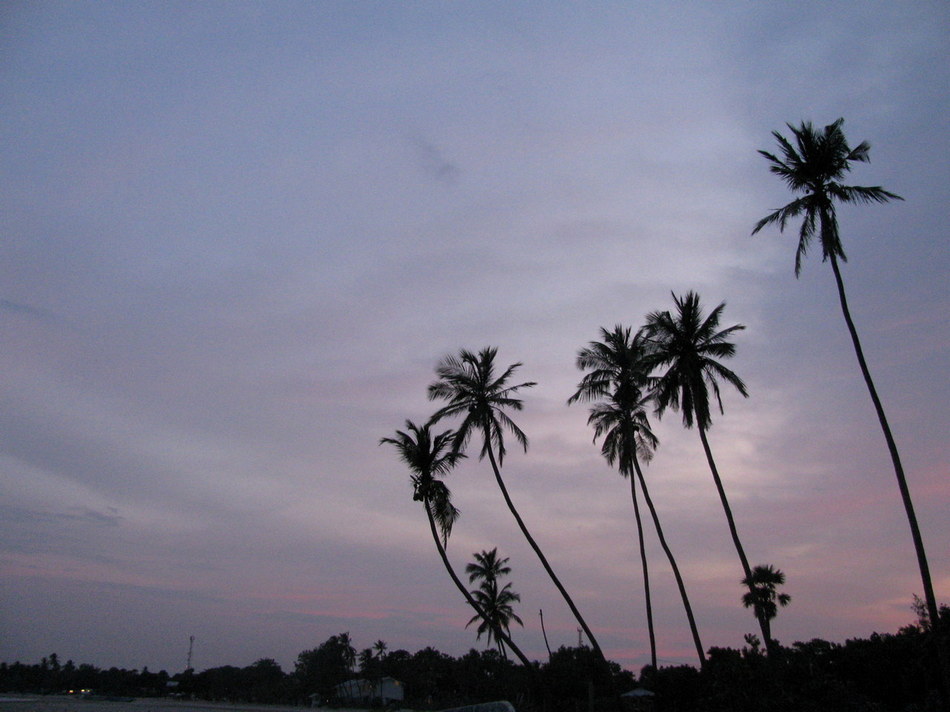 In 2000, the government finally regained control of these lands, and now it is considered exactly the opposite — super-quiet and relaxed, with doubled security measures. As you sit on a night beach, a policemen may approach you asking politely, if everything is ok. Yes sir, everything is great.

And only now we can hear the Indian Ocean flowing into the Lake Lesnoye in the east of Sergiyev Posad. This is the splash of waves on the shore. 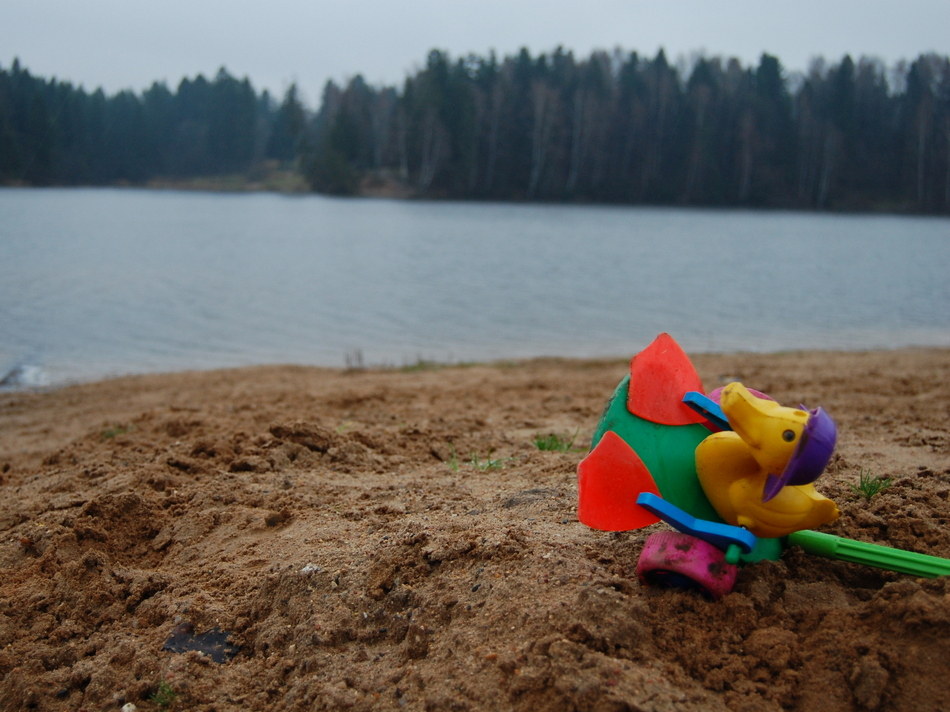